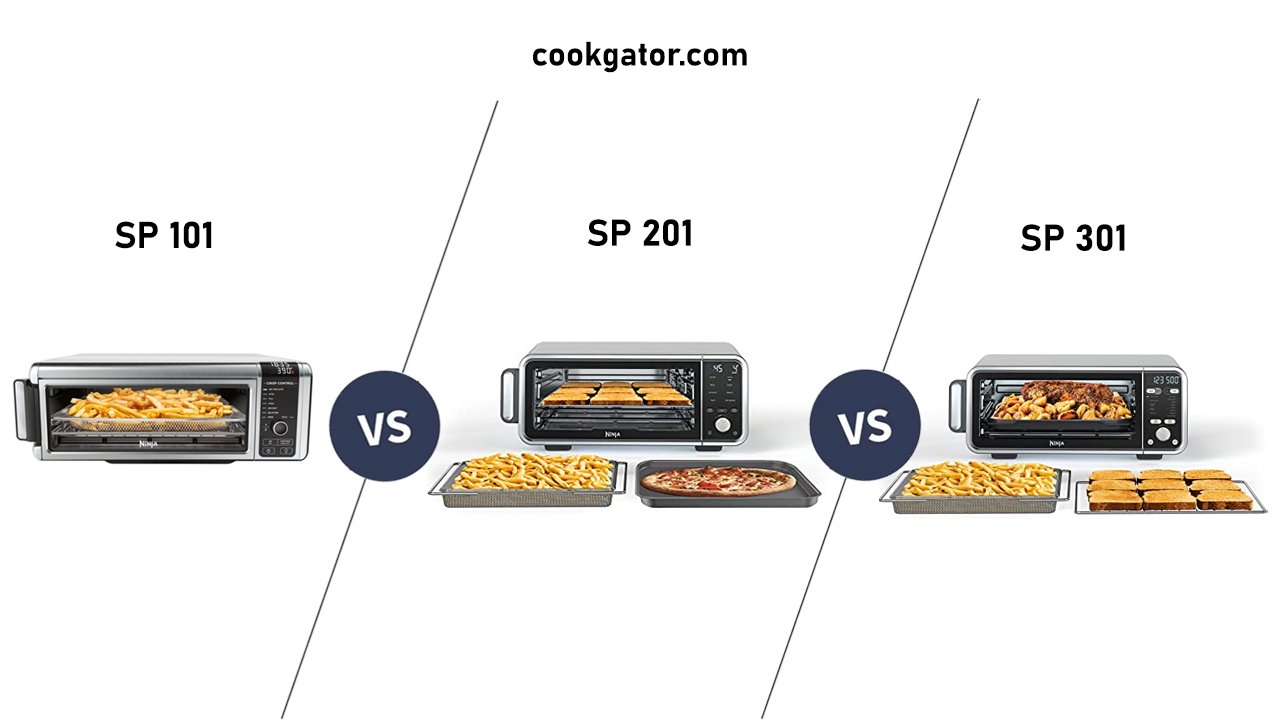 Choosing an affordable air fry oven that satisfies your needs is not easy. Ninja SP101 vs SP201 vs SP301 comparison and review will help you solve this issue.

If you are interested in multi-functioned kitchen machines, you must have heard of the Ninja foodi air fry ovens. The series has three products that mostly gain good feedback from users.

It doesn’t matter if you are familiar with the brand; Ninja SP101 vs SP201 vs SP301 comparison and review can be useful for you in choosing a product that can assist you in your master chef dream.

The series is well-known for its saving-space design; you can fold it away when it’s not needed. The three flip-away toaster ovens are somehow similar, but there are still some improvements in the latter versions compared to the previous ones.

Let’s find out what makes them different!

When you order, it will come in the set with the oven and other same support utensils.

The biggest difference between these two siblings is their appearance and capacity. The SP101 is slightly smaller and lighter, while the SP201 is bigger and (~3 pounds) heavier.

The increase in height means that the latter has more capability to serve. It’s possible for the SP201 to handle 4lbs of ingredients, allowing you to cook for more people at the same time.

It can also fit a full 2-lb-roast. Also, since the SP101 is the older model, the price can be slightly cheaper.

The Ninja SP201 and SP301 are both dialed-down versions. SP201 is considered a middle class between the classic SP101 and the newest SP 301.

It also has eight programs like the previous one, but contains a bigger capacity.

Although SP201 and SP301 share the same volume and can roast large portions of meat, a medium-sized turkey is not ideal for putting inside the SP201.

Possessing two modes (air oven and dual heat) offers SP301 more heat and cooking options (13 vs 8), especially amazing for some food that requires crispy outside but juicy inside.

The convection fan and nonstick sear plate also set the two models apart. The food is cooked faster and more evenly with SP301; thus, it helps you save time and energy.

Moreover, you can see the improved user interface of the SP301 machine.

Taking all comments from users of SP201 before, the brand is making its product close to flawless.

Although there are two modes, the interface is intuitive, so customers don’t have difficulty in understanding and using the system.

Plus, its appearance is more polished, preferred by most of the users.

When you compare Ninja SP101 vs SP201 vs SP301, you can see the brand has made a great development from its first to its latest product.

The SP301 or Ninja Foodi Dual Heat Air Fry Oven is an updated version that delivers more height. It means the oven has more vertical space, especially when compared to the SP101.

The limited size of the SP101 may cause you to struggle with cooking a big meal for the whole family.

However, SP301, with its huge capacity, which can hold up to 4 lbs of food, you don’t need to worry about it anymore. A sheet pen design is added and operates as a piece of cooking equipment.

The most noticeable difference between these two Ninja products is how many types of cooking styles they can provide.

The crisp sear function is the biggest upgrade. Thanks to the dual heat technology, the oven can be heated up to 500 degrees Fahrenheit, which is very useful in fast baking crisp edge pizza.

Since in the SP101, the small fan is located only on one side, you need to rotate or intervene in its cooking process.

Meanwhile, in the SP301, the hot air is spread to make the food done evenly.

We hope our Ninja SP101 vs SP201 vs SP301 comparison and review is a helpful guide for you before making the final decision. Each flip-away space-saving oven has its pros and cons, but in general, many users are satisfied with its performance.

It mainly depends on your need and budget to decide which one you should go for. The mid-range budget is SP201, with more capacity than the SP101.

SP101 offers an affordable price, so if you don’t need to cook a lot at once and don’t mind its limited functions, it can be an ideal option.

The most modern one is SP301, which has thirteen functions that can cook large portions. Should you usually need to cook a lot or want to explore different recipes, the product is suitable for you.